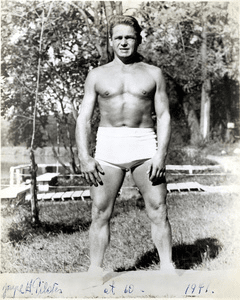 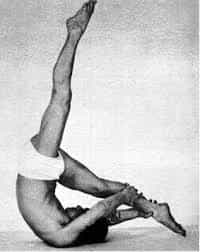 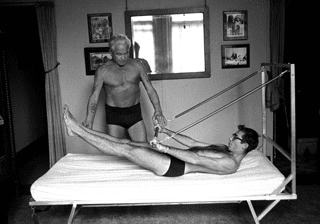 Joseph Pilates, born in 1883 near Dusseldorf, Germany, was the creator of the ‘Pilates’ method of exercise.  Joe was frail as a child, suffering from asthma, rickets and rheumatic fever.  However, he managed to overcome his physical limitations by developing his own program of exercise and bodybuilding.  He was so successful that he eventually excelled in many sports, including skiing, diving and gymnastics, and as a 14-year-old even worked as a model for anatomical drawings.

In 1912, Joe moved to England where he worked as a self-defense instructor for detectives at Scotland Yard.  Unfortunately, the outbreak of World War I saw Joe interned in the UK as an ‘enemy alien’ along with other German nationals.  However, Joe used his internment as an opportunity to refine his ideas and train other internees in his system of exercise.  He even rigged springs to hospital beds, enabling bedridden patients to exercise against resistance, an innovation that led to his subsequent equipment designs.  When an influenza epidemic struck England in 1918 killing thousands of people, not a single one of Joe’s trainees died. This, he claimed, testified to the effectiveness of his system.

After his release, Joe returned to Germany.  His exercise method gained favor in the dance community there, primarily through Rudolf von Laban.  Laban was a Hungarian dance theorist, dancer, choreographer and teacher and founding figure of Central European modern dance.  He was the creator of ‘Labanotation’, the system of dance notation most frequently used today.  German-American choreographer and dancer Hanya Holm adopted many of Joe’s exercises in her program, and they are still part of the ‘Holm Technique’.

When Joe was asked to teach his fitness system to the German army, he decided to leave Germany permanently and in 1923 he emigrated to the United States. During the voyage, he met Clara, a nurse, whom he later married.  Joe and Clara opened a fitness studio in New York, sharing an address with the New York City Ballet. His studio soon began to attract the 'elite' of New York with leading ballet dancers coming to him because his exercises perfected and complemented their traditional exercise programme. Actors and actresses, sportspersons, the rich and the famous were all attracted to a workout that built strength without adding bulk, balancing that strength with flexibility, and achieving the perfect harmony between mind and muscle.

Pilates today is taught in several forms, directly reflecting the legacy of Joseph Pilates, who developed the method some 80 years ago. He did not lay down a formal training programme, with the result that, on his death, his 'disciples' continued teaching by adding their own variations to the core philosophy and exercises.

The Pilates method has gained popularity for many reasons. Not only does it improve core stability, tone, lengthen and strengthen your muscles but it gives you a new sense of awareness about your own body; how it moves, where it holds tension and where your ideal postural alignment should be. It is this awareness that brings about the first step to change.